Johnson City, NY – A new public mural is grabbing the attention of people in downtown Johnson City. Designed by Texas-based artist, J Muzacz, the 60-feet wide by 20-feet high mural will cover a prominent wall in downtown Johnson City, located at 227 Main Street. The mural depicts notable jazz musicians, all of whom have roots in our community and played an instrumental role in the local jazz scene. It is inspired by photographs taken by Brian McMillen Photography, Antonio Porcar Cano, and the Schorr Family Firehouse Stage, along with the abstract art of Renata Bernal. 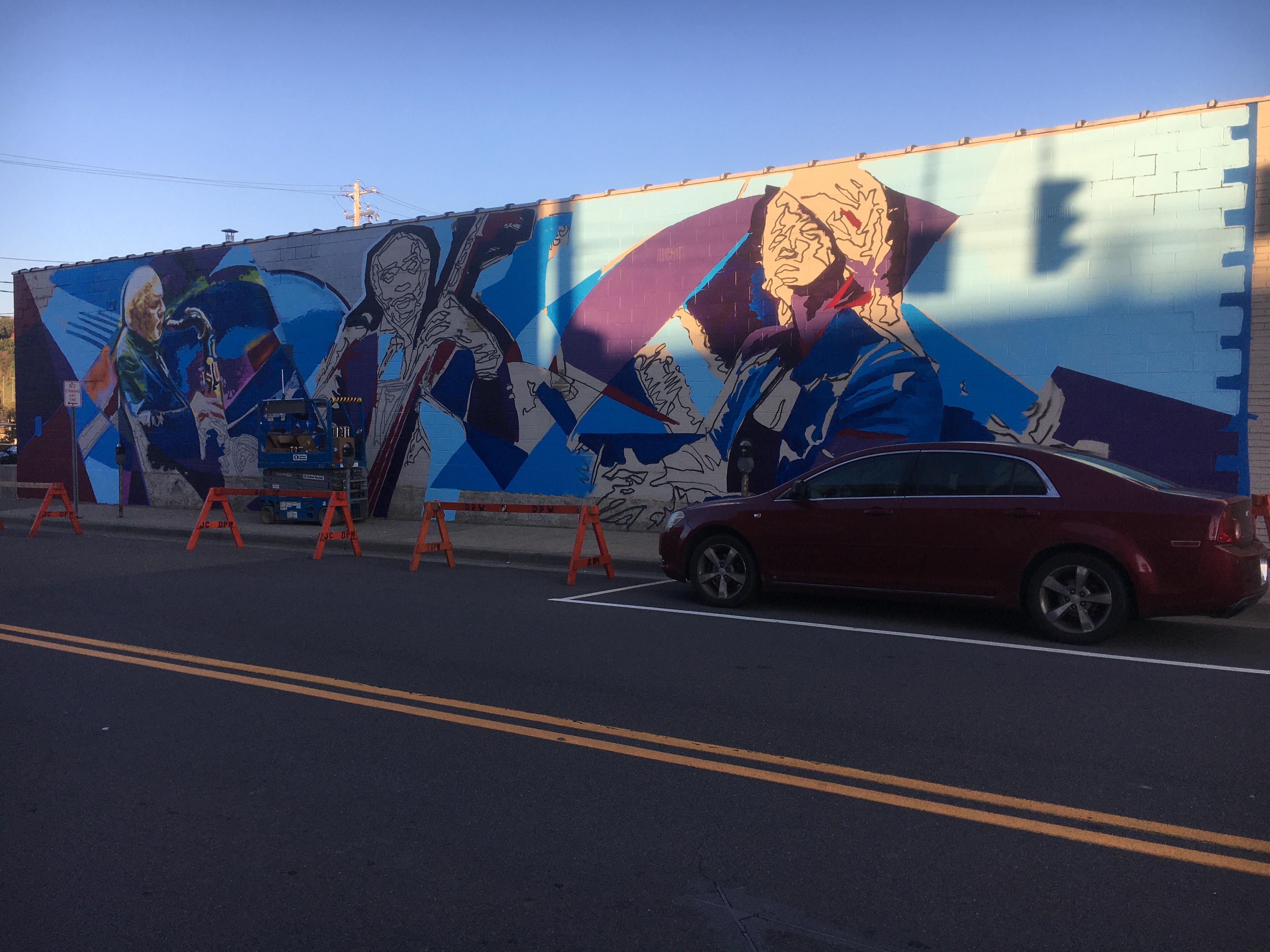 J Muzacz worked with the County for over a year to develop the project. “Upon doing research about local jazz legends, building upon a similar Legends project started a few years ago in Austin, I discovered Slam Stewart and instantly knew that’s who I’d like to paint” said Muzacz. Then digging a bit deeper, I learned of Renata Bernal’s contemporary artwork which actually inspires the geometric background throughout the entire composition. Finally, through conversations with the building owner, Al and Dena were added to round out the contemporary jazz scene” he added.

Property owner, Naima Kradjian supported this project by providing wall space for the project and working with the artist to develop the concept for the mural. “I myself, along with the new owners of the building, am happy to support public art within the Johnson City Health and Cultural District to invigorate Main Street. It’s exciting to shine a light on past and current Jazz artists Al Hamme, Dena DeRose and Slam Stewart who played a role in the rich legacy of Jazz in the Village. We hope it inspires the making of more music and public art” said Kradjian.

This mural is the second installation of the on-going iDistricts Murals and Mosaics Public Art Program. Artists were chosen by an independent panel of arts professionals in accordance with state guidelines for the project, and have been found through local, regional, national and international partnerships.

Broome County Executive, Jason Garnar, stated, “With the iDistricts Murals and Mosaics Public Art Program, we wanted to bring public art installations to our community that were not only eye-catching, but provided a reflection of our history and culture. We are excited to continue the public art program with a mural that captures a piece of our community’s cultural identity and celebrates some of our past and present music legends.”

The iDistricts Murals and Mosaics Public Art Program is a collaborative effort of the Broome County Planning Department, the Broome County Arts Council, New York State, the City of Binghamton, the Village of Endicott, and the Village of Johnson City. "Broome County Arts Council is excited to partner on a project which brings a diverse array of artists to Binghamton, Johnson City, and Endicott," says Shawna Stevenson, Director of Programs and Marketing. Other project sponsors include Visions Federal Credit Union, Golden Artist Colors, Inc., Kobra Paint, The Colonial, Lost Dog Cafe, and Parlor City Vegan.

This mural is made possible with financial support provided through the New York State Upstate Revitalization Initiative and the Greater Binghamton Fund.