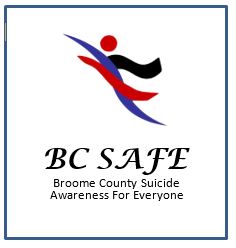 A local suicide prevention coalition in Broome County whose mission is to reduce the number of suicides and suicide attempts by increasing public awareness and providing educational and training resources.

IN A CRISIS? NEED TO TALK?

BC SAFE began as Broome County Suicide Awareness For Families and Educators began in 2012 with a focus on coordinating suicide awareness and prevention efforts for youth and families alongside the educational systems. Much of the work focused on providing information and training to educators and the community, to promote the understanding of suicide and advocate for prevention opportunities. After reviewing relevant data for NYS and Broome County, it became evident that several demographic groups were at risk of suicide, including middle-aged men, veterans, and other specialized populations. This information guided a natural progression to address all these needs, and the coalition was rebranded to become Broome County Suicide Awareness For Everyone in 2018.

BC SAFE maintains a mission of reducing the number of suicides and suicide attempts by increasing public awareness and providing educational and training resources. Through addressing and reducing stigma, via education and awareness activities, the Coalition hopes suicide will be openly discussed and addressed throughout the community. We believe these efforts will be impactful on the reduction and elimination of suicide in our county.

Q1: If you ask someone about suicide, does it put the idea into their head?

Q2: Do people threaten suicide to get attention?

Q3:  What should I do if someone that I know is considering suicide?

If you or someone you know is in crisis has warning signs or symptoms of suicide, particularly if there is a change in the behavior or a new behavior, get help as soon as possible.  Often, family and friends are the first to recognize the warning signs of suicide and can take the first step toward helping an at-risk individual find treatment with someone who specializes in diagnosing and treating mental health conditions. If someone is telling you that they are going to kill themselves, do not leave them alone. Do not promise anyone that you will keep their suicidal thoughts a secret. Make sure to tell a trusted friend or family member, or if you are a student, an adult with whom you feel comfortable.

Risk factors are characteristics of a person, or their environment, that increase the likelihood that they may die by suicide:

Signs that someone is thinking about suicide.  Although some do not, most people considering suicide will show signs that they are in distress.

People may be at risk if they:

How Can I Help

If You Are With Someone Who Is In Immediate Danger, Or Concerned For Their Safety,

In General - Being part of the solution:

When you are concerned about someone’s mental health:

When you suspect someone may be suicidal:

Other tips for communicating with someone you may be suicidal:

If you have lost someone to suicide, you are not alone. There is a community of “loss survivors” made up of people who have been impacted by a suicide death

Losing someone to suicide shocks the senses and can leave loss survivors feeling that life is futile and unfair. You may be left with unanswered questions and struggle to understand. Complex grief can also leave loss survivors with feelings of guilt, blame, fear, and confusion

Interested in learning how to become a member or for more information, please email BCSAFE@broomecounty.us